Recent reports have said that Disney has their first ever Latina princess, Princess Sofia. But if this is true, why does she look so…white?

No one makes princesses quite like Disney, but they have had an issue with diversity with their royal ladies. In the past two decades, Disney has tried to remedy this with the introduction of a few of their first ethnically diverse princesses: Jasmine (Arabian), Mulan (Chinese), Pocahontas (Native American) and Tiana (African-American.) But Disney has yet to create a princess that celebrates having a Latina heritage, which is where many thought this new princess would come in.

Why did so many people think this was a possibile reality with the latest Disney princess? According to Entertainment Weekly, during a press tour for Sofia the First (the television series featuring Princess Sofia), a blogger commented on how Sofia’s mother, Queen Miranda, had a “darker complexion than the other characters.” The executive producer responded by saying it is because “she is Latina” and thus began the speculation about Sofia being the first-ever Disney Latina princess. 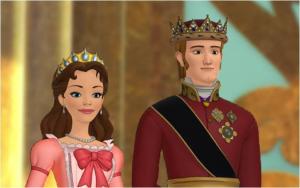 Imagine the surprise of the public when the images and videos of Princess Sofia were released. With auburn hair, blue eyes and a very fair complexion, the Latino community “questioned if such a character could really resonate” with Hispanics. The young everyday girl-turned-royalty Sofia had to not only learn the ropes of being a new princess (as is her TV movie and series’s storyline), she also had to deal with criticism that she didn’t look “Hispanic enough.”

The outcry wasn’t a muted one either. More reports about the new princess’s ethnicity dispute arose than proclaimed her arrival. Some in the Latino community felt Sofia didn’t have a dark enough complexion to be accurately considered “Hispanic” while others argued that not all Hispanics have dark complexions. It was even said that Disney lightened Sofia’s skin tone in order to appeal to a broader audience.

But what does Disney say about all this? Disney recently made a statement on the Sofia the First Facebook page that said they never claimed the new star of their Disney Junior show to be Latina. She “is a fairytale girl” and all of Disney’s characters come from “fantasy lands” that are meant to “reflect elements of various cultures and ethnicities but none are meant to specifically represent those real world cultures.” A coexecutive producer and writer for the show further explained to E! News that Sofia is actually of “mixed-heritage” with her mother hailing from a Spain-inspired fairytale kingdom and her father from a Scandinavia-inspired kingdom.

Sofia on her way to her royal new life. Source: Sofia the First Facebook page

While I can understand how frustrating this whole situation might be for the Latino community, all is not lost. Yes, this princess is not Latina, but at least we didn’t find out that Disney did intend for Sofia to be Hispanic. So the argument that Disney lightened the little girl’s skin in order to appeal to a broader audience can be stricken from the record.

Honestly, I am not in any uproar over this situation. While we still don’t have a Latina princess, we did get a new princess that has unique qualities from her counterparts. For the first time, we do have a princess who is of “mixed-heritage” and even though she is of mixed-heritage, she considers herself Enchancian like anyone else. This idea is similar to how a lot of US Hispanics come from a many backgrounds but still consider themselves Americans. Sofia also does have Spanish-inspired roots, even if they aren’t as prominent as some Hispanics.

This situation has shown Disney how popular and important the idea of having an official Latina princess in their royal lineup is. We want to teach young girls that all ethnicities are beautiful and there is no one form of “beauty.” We don’t all need to be as pale as Snow White or as blonde as Cinderella to be “beautiful.”

All the Disney Princesses teach us that diversity and celebrating who we are is important. This lesson alone is enough to show that it is time for an official Latina Disney Princess to expand the diversity of the royal ladies.

Watch the trailer for “Sofia the First: Once Upon a Princess:”